An independent publisher based in Stockport. Since their first publications in 2009, Seven Arches Publishing has run competitions for children and young people to write, and illustrate stories, so that they can take a real part in producing our books. The most successful of these was the year-long competition to write about their thoughts, feelings and understanding of the contribution Alan Turing made to our lives. This resulted in ten of the entries being included and published in a new edition of, ‘Time Traveller Danny and the Codebreaker – Special Commemorative Edition’.

Seven Arches has a new and exciting competition for children and young people to write poems on the theme of ‘saving our beautiful world’. Poems can be by older children – the students who belong to Young Identity have already written some poems on this theme and offered them to us for publication. Young children can be helped by parents and teachers to play with words (that’s writing a poem) about the plants and animals they love. If we get enough poems we will produce a book of the poems called ‘Last night the world spoke to me’. 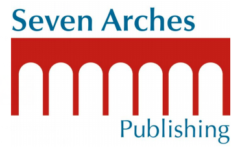 Out and About with Seven Arches Publishing