This July, Santos in Brazil, a UNESCO City of Film, finally hosted the Creative Cities Network Annual Conference after it was postponed twice due to COVID-19.

The five-day Annual Conference brings together all the 260 cities who form the Creative Cities Network: Cities of Design, Film, Craft & Folk Arts, Gastronomy, Media Arts, Music and of course Literature. For the XIV Annual Conference, and the first in Latin America, the theme was Creativity, the Path to Equality. The Annual Conference in Santos had a packed programme of presentations, case studies and keynote addresses on this theme enabling cities to share how they were using the creative economy as a transforming force to achieve a more equal society.

Manchester made its presence felt early in the week in the Mayors Forum, where Deputy Leader of Manchester City Council, Councillor Luthfur Rahman presented on how Manchester uses creativity, literature and languages to increase cultural participation. He shared our work on International Mother Language Day, the Made In Manchester poem and the Festival of Libraries: “all these initiatives say to people: your language, your culture is important to our city. They help promote equality through creativity and self-expression”. Linking our City of Literature with the City of Film, we presented the Mayor of Santos with a Portuguese-language version of A Clockwork Orange and the Stanley Chow illustration of Anthony Burgess. We also brought copies of the excellent Manchester Something Rich and Strange edited by Paul Dobraszczyk and Sarah Butler to show how writers, academics, architects and photographers are creating an alternate view of the city’s idiosyncrasies. 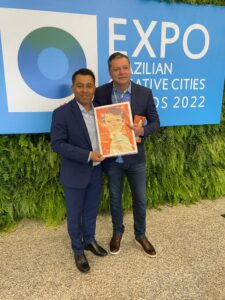 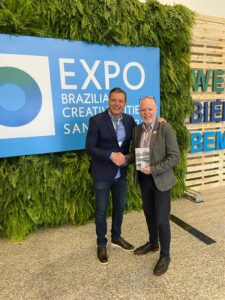 The week started with a beach clean. The Mayor of Santos, Rogerio Santos, and the Assistant Director General of UNESCO, Ernesto Ottone, led over 150 delegates on hand-picking litter and plastic from Gonzaga beach. The 5km stretch of golden sands in Santos look immaculate but on closer inspection, we found microplastics and debris washed up from the ocean. It was a sobering reminder of how we are polluting the planet’s resources, a tangible link to the 2030 Sustainable Development Goals and a calm moment of reflection, unity and purpose. 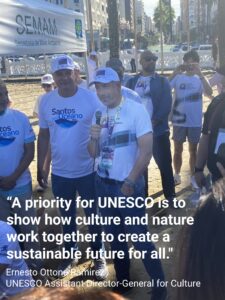 Later in the week we presented on the main platform a report from all Cities of Literature and included Cooking With Words with Anjum Malik and the Utrecht Chain Poem for World Poetry Day in which Manchester was represented by Rory Dickinson. This session also highlighted the many initiatives in solidarity with Ukraine including the chain reading of So I’ll Talk About It featuring Jo Flynn and Reece Williams for Manchester. The week was also about meeting in-person the two newest Cities of Literature, Gothenburg and Jakarta, and developing many city-to-city partnerships and projects. In total there were eight Cities of Literature in Santos: Gothenburg, Heidelberg, Jakarta, Krakow, Lillehammer, Milan, Quebec City as well as Manchester. 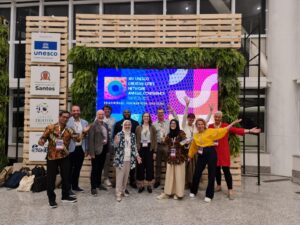 Lunchtimes and evenings were also packed with networking, visits to expos and to social events as Santos showcased Brazilian culture to the many international delegates. Evening meals randomly assigned delegates to different restaurants so each night we met even more cities from all creative fields. Given the scale of the Annual Conference there is a formality to proceedings however the passion and commitment of each city shines through. It was a privilege to represent Manchester on this global platform and to come home with a whole host of new contacts, partners and inspiration.

Amongst the main highlights

Bristol’s Cargo Movement’s response to the toppling of the Colston statue with the People’s Platform https://peoplesplatform.co.uk/ and the Cargo Classroom https://cargomovement.org/classroom/

A visit to the Urbano Caldeira Stadium to the football museum and to watch Santos FC, the team of Pele and Neymar, play Botofoga

Milan’s use of Virtual Reality to promote inclusive reading in libraries and prisons https://www.comune.milano.it/web/milano-city-of-literature/milano-citta-della-letteratura/i-nostri-progetti-nazionali/lettura-inclusiva-per-lettori-vulnerabili

The Coffee Museum in Santos – the often distressing history of coffee production in Brazil in the beautiful surroundings of the 1920s Coffee Exchange building https://www.museudocafe.org.br/en/

The Percival Lecture: Manchester, UNESCO City of Literature: Culture and the Sustainable City