The main purpose of this activity was to raise awareness of how Manchester’s linguistic diversity is made visible on signage across the city, and to allow participants to explore this diversity. The activity draws on LinguaSnapp, a mobile app developed at The University of Manchester to document and explore the linguistic landscape – written language use in public place on shop signs, posters, menus, graffiti, and more. The activity uses LinguaSnapp’s publicly accessible interactive online map, which visualises the geographical distribution of languages or language combinations across Manchester. 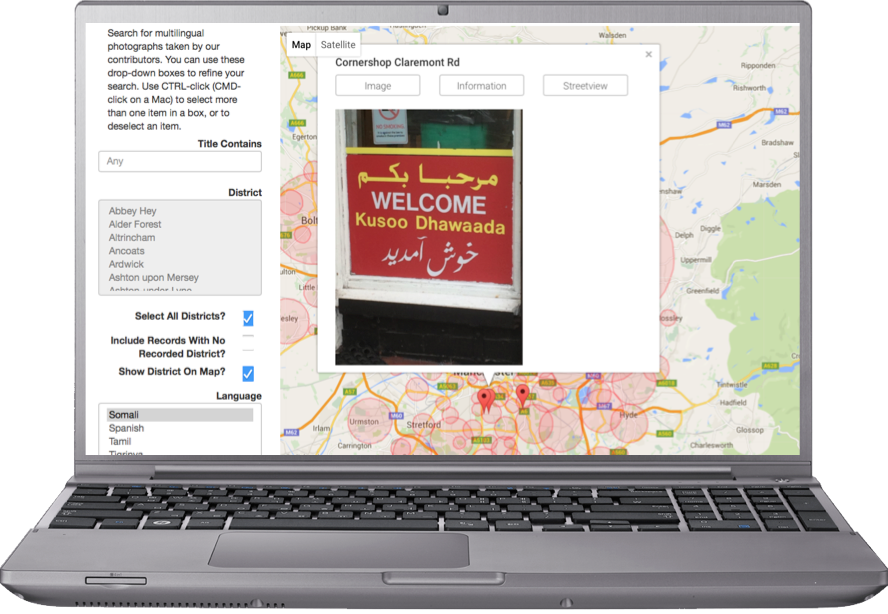 We invited participants to explore the LinguaSnapp map, displayed on a screen, by filtering the map for selected languages and/or language combinations they were interested in, and to explore the languages recorded in selected parts of Manchester (e.g. where they live or work). We asked, for example, which languages they spoke or would like to speak, or which languages they had noticed on signage in Manchester. We then used LinguaSnapp’s interactive map to search for these languages and discover their uses across the city on restaurant signage, shops, or other outlets. Furthermore, we invited participant to reflect on why shop keepers may decide to use various languages on their signs

In this way, the activity encouraged visitors to reflect on how the languages spoken around them may be visually present in the city, as well as on the linguistic diversity of specific neighbourhoods. The activity helped participants identify patterns of language use across the city and invited them to reflect on the languages they saw in the city in their everyday lives. Additionally, the engagement with multilingual signage helped raise awareness of the potential of languages in a city like Manchester.

Participants learned about LinguaSnapp as a tool that is useful not only for researchers, but also for teachers, students and the wider public who are interested in exploring languages in their surroundings. Furthermore, our questions about participants’ own language proficiencies often led to conversations about their own linguistic biographies (i.e. the languages they had learned across their lifespans), as our interaction gave participant space for such reflections while engaging with the app. Others would talk about the neighbourhood/city/country they themselves came from, which prompted conversations about patterns of language use in these areas.

Participants thoroughly enjoyed reflecting on their own language practices, proficiencies and the languages displayed in their neighbourhoods. Participants enjoyed talking about their own linguistic profiles. With some participants we reflected on how certain languages tend to be spoken and written, while others might be only spoken but not used in writing.