Although Manchester has one of the largest Romani speaking communities in the UK, our everyday encounters reveal that not much is known about the Romani language, and that this lack of knowledge has given rise to some misconceptions about the language’s origin and use.

The aim of our involvement during International Mother Tongue Day was to dispel certain misconceptions about the Romani language and to show its connections to other languages, including English. We prepared a stand with various materials providing information on Romani, some books printed in different Romani dialects and two Romani language activities.

In order to draw attention to the origin of Romani and its development, we created a card activity where participants were invited to match words from Romani to their Urdu and Greek equivalents. We chose Urdu because it shares the same roots with Romani while Greek was chosen due to its strong influence on Romani once the Roma people arrived in Europe from Asia. Due to the name similarity and the fact that many Roma who live in the UK come from Romania and also speak Romanian, it is often thought that Romani and Romanian are the same language or closely related. Participants were surprised to find out that Romani was related to Urdu, Panjabi and Hindi. Visitors who could speak these South Asian languages were surprised to see that they already knew so many words in Romani. 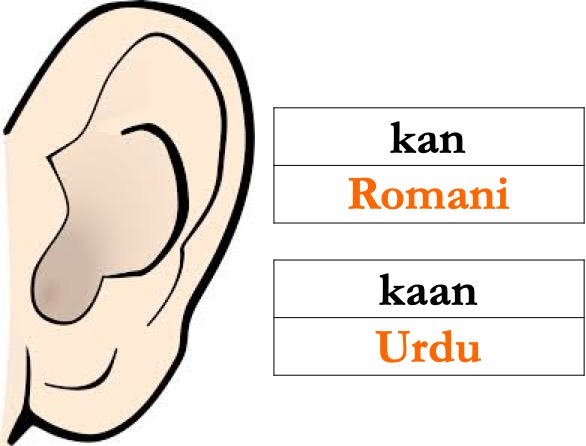 Our second activity showed that Romani had also influenced other languages, in this case English. We chose four English words borrowed from other languages: banana, kangaroo, lollipop and pal. Two of the words were of Romani origin: lollipop – from the Romani loli pabay – red apple; and pal – from the Romani pral – brother. We asked participants to guess which two words came from Romani and they could then check the answers on the back of the card.

While chatting to visitors at the stand we noticed some questions that kept coming up such as: Can you write in Romani? What is the Romani alphabet? Which countries is Romani spoken in? Can you understand Romani spoken by Roma from other countries? We tried to answer these questions as best as we could using our own experience and knowledge of the language as well as the printed materials we had on display. We noticed that the word games and discussions at the stand had stirred in our visitors a desire to learn more about the Romani language as they asked for materials to take home and for further links to internet resources.