It’s at times like this when I think about Tyson, the robot dog. Not many people know about Tyson. He’s the main character of an angry story I wrote about 10 years ago called, appropriately enough, ‘Tyson/Dog’. It was the first of my tales to be published in a proper literary magazine, the first success at a time when I was trying to take my writing hobby more seriously. I’d taken a punt on Tyson. I was fond of him, but his tale was quite weird, and maybe a tad preachy. But I sent him, they liked him, and there he appeared in glossy print, in all his cyborg canine glory.

Tyson’s triumph kickstarted a momentum for me. A forward motion of just keep going that has sustained my creative locomotion for the last decade. Tyson is the voice in my head that nudges me to write new stories, and to apply for opportunities, and to take creative plunges. He was with me again just last week while I was waiting to be called to a stage to take part in an Estonian Poetry Slam that I hadn’t signed up for. I’d been introduced to the hosts as a writer-in-residence, and they’d invited me to take part in the Slam. I turned to Tyson, my perpetual-forward-motion-pooch, and he said; go on, what’s the worst that could happen? 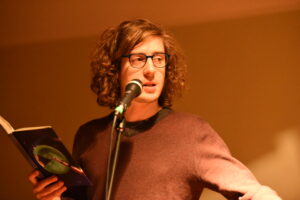 That’s the benefit of imaginary robot dogs; you can programme them to speak English. I, on the other hand, was about to read an English-language story to a room full of Estonian poets, in the Estonian city of Tartu. Moreover, it was going to be judged by the audience. I chose a tale about a cryptid bird who lives on an unmapped stretch of river hoping the uncanniness of the story would have universal appeal. It seemed to go down pretty well. I didn’t end up winning the Slam, but I’d stepped up, held my own, and Tyson’s cybernetic tail wagged in approval.

I had been rather nervous before flying out to Tartu. I’d been dispatched by the combined forces of Tartu City of Literature and Manchester City of Literature on a creative residency to collaborate with an Estonian artist to create something new. This new thing, whatever it will end up being, will form part of the Tartu 2024 European City of Culture celebrations under their ‘Futures Better and Worse’ theme and will be seen by quite a lot of people. Worries flittered through my head. What if I don’t hit it off with my collaborator? What if I find Tartu uninspiring? What if Tartu finds me uninspiring?

I needn’t have worried. My collaborator, Henri Hütt, is a delightful, excitable, and highly talented performance artist with a lot of collaboration experience and a head buzzing with weird and wonderful ideas. Tartu is a fascinating and unassuming place which strikes a near perfect balance between displaying its history to tourists while maintaining the soul of its identity. All the people I met were bursting with pride about their humble city and its poetic and artistic heritage. Stories large and small lurk in every nook just waiting to be teased out. The ghosts of recent Soviet history still linger at the edgelands, but there is no doubting the Estonian core at the heart of everything. It feels rich with mythologies and folklore, and yet there are gaps and abandoned spaces that remain wide open with potential.

But what about me? Where was I going to ‘find myself’ in this city? I’d never undertaken a writing residency on this scale before and I felt I was in uncharted waters. How exactly does a residency work? What exactly am I a resident of? Shouldn’t I be way more prepared for this? There didn’t appear to be a comprehensive guide, or a clear set of rules or expectations. Instead, I had to put my faith in Tyson and follow the lead of his sniffing techno-nose. He offered a pearl of wisdom as soon I set foot on Tartu soil: the city would not reveal itself to me, he said, if I did not open myself to the city.

The Poetry Slam took place on the last night of this first visit. Days earlier, on my second night, I was on the bill at the Crazy Tartu poetry festival. Fortunately, I knew about this one in advance, so I was able to prepare. I had a few tales to tell, plus a bit of chat about my residency, but I needed something with a spark, something to centre myself and my Estonian audience in the moment of that moment. I turned to my notebook where I’d been keeping a diary of my thoughts and ideas so far. There was a passage in there written during the first afternoon of the Crazy Tartu festival, a flowing bit of prose about a non-native speaker listening to hours of Estonian poetry in a cosy basement room. I led with it. I spoke of the moody and mysterious poets, many of whom were now in my audience. The room seemed to draw itself towards me. Time itself stood by for a few moments and listened. I ignored my worries about language barriers and proving myself worthy, and just told stories to a group of people in a room. I took residence in my allotted time. 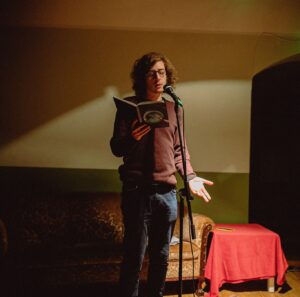 Hours later, a little drunk from the afterparty and the atmosphere, I walked Tyson back to our apartment north of the river. The bulk of the residency, including the surprise performance at the Poetry Slam, was still ahead of me. But for now, I felt far more settled. Plans had formed for a meandering tour of the outer edges of ‘non-Tartu’ with Henri, and I had a long list of new contacts all eager to show me their side of their city. I’m not quite sure what had compelled me to read from my residency diary, but it had worked supremely well as an opening gambit. More than anything, it had shown me that a residency is not a static, fixed down thing as the word seems to suggest, but a fluid, exploratory, meandering series of encounters that work their way towards surprises and unexpected meanings.

I have returned home to Manchester, and already Tartu seems a distant dream. But there’s a long time to go before 2024 and my residency is far from finished. Henri and I still don’t know what the end result will be, but we’ve found a shared love of the strange and absurd, so it’ll likely be wonderful. As long as my trusty companion Tyson stays by my side, I’m sure we’ll sniff it out.

For now, here’s that diary entry in TikTok form: 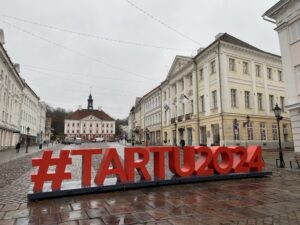 Interviews with the Festival of Libraries Official Writers in Residence

Insta-live with Kate Feld and our Virtual Writers in Residence

Tartu City of Literature: A meeting point of language and cultures