After a competitive selection process for Tartu’s open call for an esteemed writer’s residency, David Hartley will be their writer in residence to produce work in celebration of Tartu being the European Capital of Culture in 2024.

David is Manchester based and many people may already know him from his writing, spoken word performance and podcast.

With a PhD in Creative Writing from the University of Manchester, David has been publishing work with Manchester based and national publishers since 2012 (though writing and self-publishing for over fifteen years). He’s written single stories and pieces for various magazines and anthologies and has written four of his own collections of short stories.

David has many accolades to their name already. In the last two years alone, David has been shortlisted for the Bridport Prize and Oxford Flash Fiction Prize in 2020, and their recent publication ‘Fauna’ from Fly on the Wall Press, was shortlisted in the Best Short Story Collection category of the Saboteur Awards and longlisted for the Edge Hill Short Story Prize this year.

“I’m completely thrilled to be selected for the Tartu residency. I feel like I’m about to embark on the most thrilling journey of creative discovery in a country I currently know very little about. In these precarious and confusing times, it’s fantastic that art, creativity and collaboration are being taken seriously and I greatly look forward to ‘building my own utopia’ with Estonian partners.” 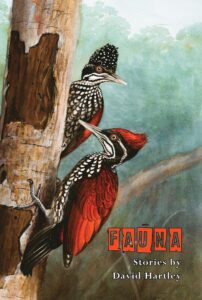 David hopes to use the Tartu residency to expand ideas they’ve been considering recently, such as that of Fauna which

“drew on my concerns for animal ethics in the contemporary moment as we reckon with our status as human animals in a threatened and precarious ecosystem. I’d love to expand this thinking further to explore how reconceiving humans as animals helps us to confront the ‘ dystopia of the climate crisis resulting from industrialist and colonialist utopias”

David characterises his writing as ‘weird fiction’, incorporating various aspects of speculative fiction rather than limiting work to a specific genre. His work typically addresses themes around mythmaking, hauntology, neurodiversity, and veganism.

David co-hosts the Autism Through Cinema Podcast and is the Cofounder of the ‘Narratives of Neurodiversity Network’. 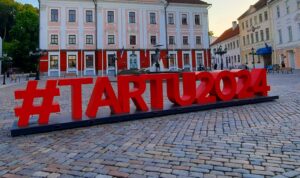 In April this year Tartu, in Estonia, announced their writer’s residency application.

Tartu is a UNESCO City of Literature and has been named the European Capital of Culture 2024. They have decided to use a single writer’s residency to build a piece of work to mark the year.

The theme of this residency is ‘Bring Your Own Utopia’ and will see David Hartley paired with Estonian artist Henri Hütt. They will work together during David’s residency in Tartu and collaborate once David has returned to Manchester. David will return to Tartu in 2024 to exhibit the collaborative work as part of the Capital of Culture programme and 2024 Prima Vista International Literary Festival ‘Futures Better and Worse’.

“Having been exposed to those and other real and imagined utopias and dystopias in different degrees, Europe today speaks of them in a Babel of different languages, with varying fears, hopes and beliefs […] we bring those languages together from Europe and beyond – to find some human common ground in them and to search for new utopian futures in past and present dystopian realities.” – from the Tartu residency brief

David and Henri are in the very early stages of their work already and they know that, using this as a springboard, they want to start by spending time together in Tartu talking to the people of Tartu to form the basis of what they create.

As University of Manchester Alumni, we’re not the only ones who are excited David has been chosen.

“David Hartley is a brilliantly inventive writer and performer, someone as at home in this world as in the alternate realities he so capably conjures in his fiction. It is an exciting prospect to imagine how he will develop this new, multidisciplinary project in Tartu, and what wild new creature will emerge from UNESCO’s support for international Creative City collaborations…” – Prof John McAuliffe, University of Manchester.

Interviews with the Festival of Libraries Official Writers in Residence

Tartu City of Literature: A meeting point of language and cultures