Books to Theatre Adaptations and the Magic of Winter Theatre

Last week we were invited to the first show of The National Theatre’s The Ocean at the End of the Lane at Salford’s Lowry Theatre. We were excited to see how a company would take Neil Gaiman’s famously magic imagination and create this story for the stage. What we didn’t know was that this was not only the first show at The Lowry, but the first show of this touring production ever.

(Greater) Manchester is famous for the ‘we do things differently here’ mindset, so it’s understandable why the decision to start this piece here was made. We appreciate it, we really do, and it’s brilliant that it means we got this piece for our winter theatre offering. Everyone wants magic at this time of year…

… and magic is what we got. We knew we’d get it from the page, but we got it throughout the show as well.

Creating for stage has limitations as everything needs to be ‘physically’ manifested. Creating for a touring show has even more because everything needs to be easily mobile, robust and (honestly) fit into a lorry. But, limitations seem to actually force us to be more creative than if we had complete free reign and the creativity of this show is stellar. We were in kitchens, we were in woods, we were in bathrooms and we were in water, but there was no ‘set’ change, just props and minimal furniture differences, yet the audience were with them every step. 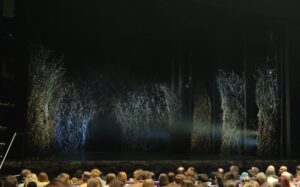 It is an impressive piece that gives you no doubt where you are while also allowing an audience the intelligence to fill in the blanks. There were visuals that couldn’t be created without showing us how they’re done and the show really leant into that deciding not to hide but make it a spectacle, if anything it added to the magic. What was also magic were the times where I had no idea how something happened. I’m an adult, in a chair at a winter theatre show and I’m grinning like the child the show is making me, because I am in a place of complete puzzlement and wonder.

It is odd to be so full of joy while also being pulled into completely terrified. While this show held magic to its heart, at the end of the day it’s a horror story, and we know that horror stories which attack our lost childhoods hit hard. It did. There were audience jumps and screams. As it’s theatre, we can stop suspending our disbelief to take us out of that place of fear. ‘Oh, I see how they did that’ moments help us feel in control and help us remain just ‘unsettled’, but moments where you were scared AND unsure of how something had been achieved definitely upped that ‘terror’.

The performances were all incredible, the imaginative staging is occurring around them at all times and at no point did the actors remove the audience from the story or provide any doubt that the characters were just interacting with the world the same way we would. The small moments were as powerful as the big ones and the line of raw emotion into melodrama was never even toed, everything was sensitive and genuine and brought the audience along through sweet moments to utter horror.

Something that caught me at the end was everyone chatting away as they left in amazement and clear positive vibes. While I could hear (and I myself was saying) that things about the book were different in pacing, etc, I didn’t catch a single ‘the book is better.’

There have always been successful book to theatre adaptations on stage, War Horse, The Curious Incident of the Dog in the Night Time, The Woman in Black (and that’s not moving into musicals territory). Agatha Christie’s The Mousetrap has been running since it first opened in October 1952. But recently there has been a huge surge in West End adaptations; Life of Pi, The Belle Sauvage, The Great Gatsby, The Lion, the Witch and the Wardrobe, & Juliet, To Kill a Mockingbird, Medea, The Demon Dentist, etc. It’s clear adaptations will be around for a while and they can only be producing them because people want to see them.

There is something about theatre that doesn’t take us to that sentence ‘the book is better’, but if you’re a fan of a book that has been adapted to film you have to brace yourself for that conversation afterwards. People NEED you to know that they have read the book AND that the book is better. I often find myself pointing out that ‘they’re not the same thing and obviously a film can’t do what a book can’, ‘they couldn’t be the same story’ and sometimes ‘would you want to have just watched the same story you’ve read?’. This isn’t the case with theatre adaptation though.

Do we still view theatre as more high-brow than film? Do we allow theatre more freedom because we see it as a limited creative medium? Do we give it more leeway because ‘there’s only so much you can do on stage’, and because of those lower expectations we can only be impressed (especially now productions can do some dazzlingly amazing things)? Or, because we know films can do anything now that CGI is where it is, we expect a film to be the same as what we see in our minds when we read? It can’t be though, it will be what was in the Director’s (and producer’s) mind when they read it, which won’t be the same as our own.

When we watch a film adaptation we’re watching someone else’s version of our story when we want to see our own, however when we go to see theatre, we know they can’t create what we have in our heads. There will always be people who hold theatre on a higher pedestal than film, and honestly with plays such as The Ocean at the End of the Lane, it’s clear to see why.

The play runs at The Lowry until the 8th January and there are still some tickets available here.

Or find out more about the tour here.

An Evening of Gothic Horror with William Friend and Mathew West