In writing my novel The Falling Thread I set myself the task of following one family and their lives in Manchester from 1890 to the eve of the 1st World War and in doing so to try and build back the city in words. 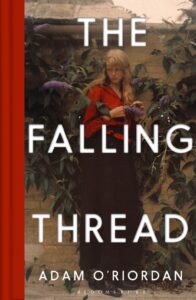 That wonderful paradox we all inhabit is that past only ever exists as a function of the present moment. Or as William Faulkner puts it ‘the past is never dead. It’s not even past’. Growing up in Manchester in the 1980s there was an indelible sense of living in the aftermath of something – the grandeur of the derelict and decaying buildings, the trips in primary school on coaches with red curtains reeking of cigarette smoke to Quarry Bank Mill where the working conditions of the last century were revealed to us. That diffuse sense that something architecturally awe-inspiring and yet, on a human level, abjectly awful had occurred. It had created our city’s magnificent remains yet here we were gripping our packed lunches as we were told stories of children our own age trapped and maimed dashing between the clacking looms. As if the city itself didn’t want us to forget. But how then do we go about remembering? 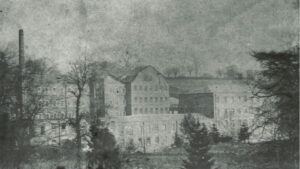 Early in researching The Falling Thread I spent several days in the British Library leafing through a series of old ledgers and directories, crestfallen by the end of each day when material that might enliven a document historian had left me utterly deflated. The past here felt too immense, too full of detail, too overwhelming to capture. The image that comes to mind is of an anaconda attempting to swallow a deer. So if it wasn’t to be the library where should I look? The Situationist International, that radical set of avant-garde artists and writers in Paris in the 1950s popularised the idea of the ‘dérive’ a walk that lets the city itself guide you. This sounded worth a try.

Stride out south west from the Manchester city centre through an under loved and slightly soulless section of Old Trafford (an otherwise vibrant and multicultural neighbourhood) and eventually you’ll pass a substantial villa (now drab offices) where the blue plaque tells you Dodie Smith (a writer whose legacy, ripe for Situationist interpretation, endures in large part thanks to Disney’s famous adaptation of her novel The Hundred and One Dalmatians) once lived, in a place ‘so quiet and semi-rural that that corncrake could be heard’. 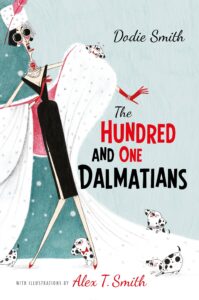 Promoted by the blue plaque into tracking down Smith’s autobiography I discovered another Manchester, I loved her description of the warm and well-built Old Trafford houses compared to the cold and draughty ones she and her mother later lived in London’s Holland Park: Thorncliffe, unlike most Old Trafford houses, was stuccoed and painted cream… the electric trams, which had replaced the old horse drawn trams, were unpleasingly close… Their points were changed almost opposite to us, where the two roads met, and their trolley poles were swung from wire to wire, resulting in surprising electric sparks.

That sense of the future (those trams, those spark) brushing up against the past – a lesson the past isn’t fixed and static but a place into which the future is always looking to make in incursion. Evoking an historical present means holding future and past in a proper and proportional tension. Around the same time, I arrived at that realisation, second nature to all historical novelists, that the magpie is more apt a role than an anaconda to assume. Swooping on those glittering things that draw the eye. Fittingly, as I write this, I can see a sleek and sharp-beaked young magpie surveying the streets from a broken chimney pot outside. 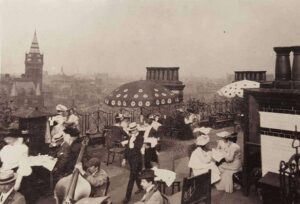 Roof terrace of the Midland Hotel, Manchester in the early 1900

Among the treasured things I found was a photograph of the band on the roof of Manchester’s iconic Midland Hotel –a fragment that so wonderfully and richly evokes a whole era – the casual elegance of the musicians off set by the brooding gloom of the city scape we see behind them. As a novelist these fragments, these little glimpses can open up whole worlds to you – something you can riff on or improvise around. They are the prisms through which the light of your imagination can pass. Which isn’t to say words didn’t play their part. For me writing the novel was over-writing the novel, I became greedy for detail, glutting on the listings in auction booklets, over describing each item that populated a room or adorned a building. The final edit which saw the manuscript halved in size what getting rid of this detritus, sweeping this accumulated past, that had grown like a wasp’s nest in an attic, around the story I was trying to tell. After all this remembering it was time to forget. 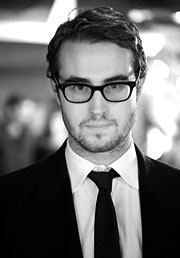